This Promotion Has Expired

Go toe-to-toe with your competition, deliver a knockout, and you could be playing for a seat to the World Series of Poker National Championship.

Step in the ring April 20-May 3 for the Knockout Series. Every player will have a bounty on their head and you’ll rake in extra cash for each player you knock out of the tournament.

KO the rest and you could be sparring with the best at the WSOP National Championship.

· Tournament is limited to participants 21 years of age or older with proof of age that Casino, acting in its Sole and absolute discretion, deems appropriate.

· Tournament is subject to all applicable federal, state, and local laws and regulations, including gaming, and all aspects of the Tournament are subject to the approval of appropriate regulatory authorities.

· Participants agree to allow Casino the unconditional use of their name and likeness for promotions/advertising and announcements without compensation, consideration, notice, review, or consent, where permitted.

· Winners are responsible for any and all taxes, licenses, registrations and other fees.

· Winnings may be subject to reporting and withholding pursuant to federal IRS regulations, and participants are required to cooperate with Casino in completing necessary forms.

· Individuals who are excluded from casino facilities, either through a government program or by their own request, are not eligible.

· Casino may cancel, modify, relocate or reschedule the Tournament for any reason with prior notification to the appropriate gaming regulators, to the extent such is required.

· Casino is not responsible for lost or late tournament entries, nor for electronic transmission errors or delays resulting in omission, interruption, deletion, defect, delay in operations or transmission, theft or destruction or unauthorized access to or alterations of entry materials, or for technical, hardware, software, or telephone failures of any kind, lost or unavailable connections, fraud, incomplete, garbled, or delayed computer transmissions, whether caused by Casino, users, or by any of the equipment or programming associated with or utilized in the tournament or by any technical or human error which may occur in the processing of submissions which may limit, restrict, or prevent a participant's ability to participate in the Tournament.

· If for any reason the Tournament is not capable of running as planned, including infection by computer virus, bugs, tampering, unauthorized intervention, fraud, technical failures, or any other causes within or beyond the control of Casino which corrupt or affect the administration, security, fairness, integrity, or proper conduct of the Tournament, Casino reserves the right at its sole discretion to cancel, terminate, modify or suspend the Tournament.

· Casino may impose penalties upon any person who gives, makes, issues, authorizes or endorses any statement or action having, or designed to have, an effect prejudicial or detrimental to the best interest of the Tournament as determined by Casino, acting in its sole and absolute discretion. This may include, but shall not be limited to, expulsion from the event and property and/or loss of the right to participate in this or any other tournament conducted by Casino.

· Casino may disqualify any Participant from winning any prize or receiving any gift based upon fraud, dishonesty, violation of Official Rules or other misconduct while on the property or otherwise occurring whether or not relating to the Tournament or as otherwise reasonable or necessary for Casino to comply with applicable statutes and regulations, in its sole and absolute discretion.

· Any attempt by any person to deliberately damage any program or to undermine the legitimate operation of this Tournament may be a violation of criminal and civil laws and should such an attempt be made, Casino reserves the right to seek damages from any such person to the fullest extent of the law.

· A copy of these Official Rules and any changes will be available at WSOP.com throughout the duration of this Tournament.

· All tournament play will be conducted in accordance with NJAC Rules of Games 13:69F-Subchapter 14 (as applicable to online gaming).

· Where a situation arises which is not covered by these Official Rules, Casino shall have the authority to render a judgment, including the imposition of a penalty, in accordance with the best interests of the Tournament and the maintenance of its integrity and public confidence.

· Prizes and entries are non-transferable.

· With regard to all prizes identified in these Official Rules, Casino reserves the right to substitute prizes that have or have not been awarded as long as the value is substantially the same as the original prize offered in the event that the original prizes become unavailable. In no event will Casino be obligated to award more prizes than the number of prizes stated in these Official Rules.

· Any material participants submit to Casino in connection with participation in this Tournament shall become and remain the property of Casino and will not be returned.

· Holders of the New Jersey Casino Control Commission key license are not eligible to participate.

· CIE Employees are not eligible to participate.

· Program is subject to all terms and conditions of WSOP.com.

· Persons prohibited from casino gaming or from entering a casino hotel under New Jersey law are ineligible.

· By participating in this Tournament, participants agree to comply with all rules contained herein.

· Void where prohibited or restricted by law.

· Tournament begin at pre-determined times and seat assignment is random

· When there are 2 players remaining, the button will open with the small blind and be the first to act. There are unlimited permissible raises.

· Players and observers cannot discuss the hands until they are over

· If there is a chat function, players must use it respectfully

· All tournament entries are subject to review and verification.

1St place winners of the first 14 tournaments will advance to the Knockout Series Champions Freeroll (Freeroll) on 5/4/14. Winner of the Freeroll will win a seat at the $10,000 WSOP National Championship on 5/22/14. 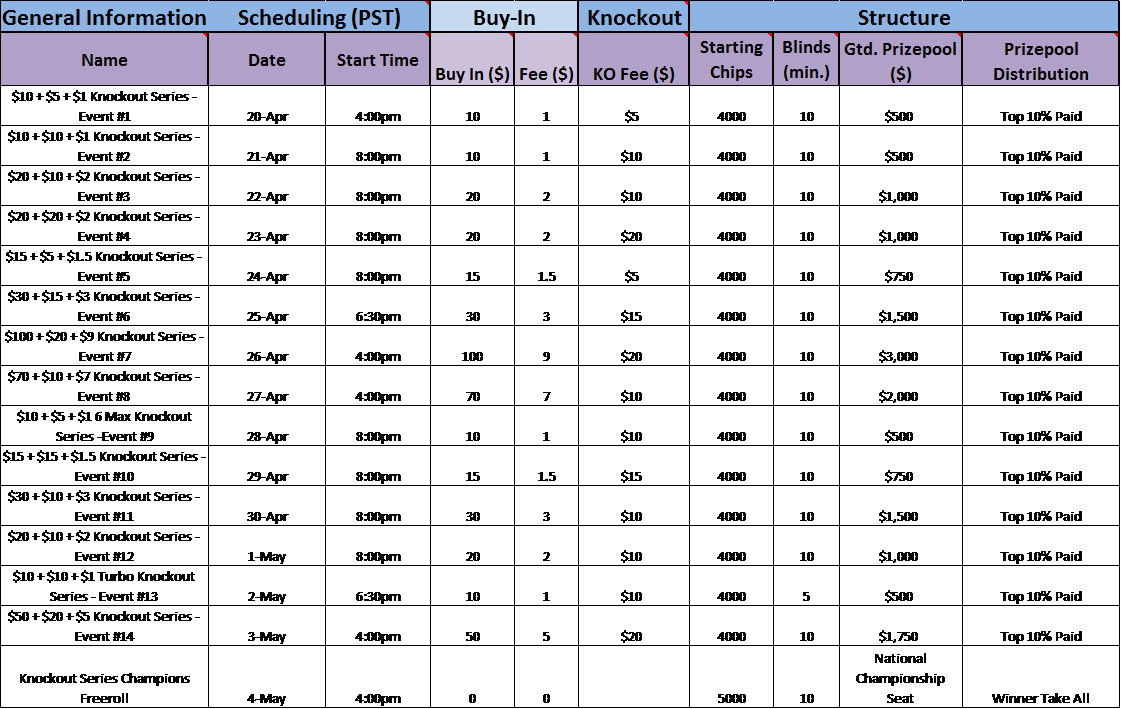 5/4/14 Freeroll prize has no cash value and is non-transferable. CIENJ will contact the winner via email and phone to provide information on how to register for the National Championship.

Registration Time for all events with the exception of the 5.4.14 Knockout Series Champions Freeroll: Players may register 4 hours prior to start time and will fund their buy-in and entry fees in accordance with Internal Control Section 13:69O 1.3(d). Players may register for a tournament within the WSOP.com client, by clicking the Tournament tab and then double-clicking on the desired tournament name. A screen will open that contains a "register" button. Upon clicking "register," the player will receive a confirmation stating the buy in and fees. The player will continue registration by clicking "proceed," or "cancel." When successfully registered, the player will see a pop-up indicating successful registration. If the game is in progress, the player will be seated; if prior to start, a table will open up within the WSOP.com client when the tournament begins.

Registration information for the Knockout Series Champions Freeroll: Qualified winners from the first 14 tournaments will receive an email that tells them they are able to register for the Freeroll. This email will be send out within 24 hours.

Prize Pool: Top 10% Paid in accordance with the attached prize structure chart. The Knockout Series Freeroll prize is winner takes all $10K Seat the National Championship on 5/24/14 in Atlantic City.

Redemption: Winning patrons will receive funds via their internet account, and redemption/withdrawal of funds may be completed in accordance with Internal Control Section 13:69O 1.3(e).

All revenue will be recorded and reconciled in accordance with Internal Control Section 13:69O 1.9(d).

Must be 21 or older to gamble. Know When to Stop Before You Start®

MOST TRUSTED BRAND IN POKER

For more than forty years, the World Series of Poker has been the most trusted name in the game. WSOP.com continues this legacy, yet strikes the proper balance between professional-grade and accessible. It's all the action and prestige of the World Series of Poker, from the comfort of your home or locale of choice. At WSOP.com, anyone can play and anyone can win. Dreams are dealt on daily basis. And no matter who you are, there's always a seat waiting for you.

Caesars Entertainment Corporation is the world's most geographically diversified casino-entertainment company. Since its beginning in Reno, Nevada, 75 years ago, Caesars has grown through development of new resorts, expansions and acquisitions and now operates casinos on four continents. The company's resorts operate primarily under the Caesars®, Harrah's® and Horseshoe® brand names. Caesars also owns the World Series of Poker® and the London Clubs International family of casinos. For more information, please visit www.caesars.com.

Caesars welcomes those that are of legal casino gambling age to our website.
WSOP.com is owned by Caesars Interactive Entertainment, Inc.
One Caesars Palace Drive, Las Vegas, NV 89109

Know When to Stop Before You Start® Gambling Problem? Call 1-800-GAMBLER

©2020, Caesars Interactive Entertainment, Inc. All Rights Reserved. The use of this website is governed by NV law